ARTIST IN THE ARCHIVES: PAMILA MATHARU IN CONVERSATION WITH GABRIELLE MOSER 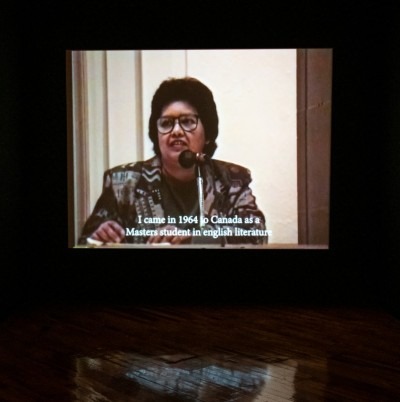 Join artist Pamila Matharu for a screening of stuck between an archive and an aesthetic, a new experimental documentary recently featured at A Space Gallery as part of the 32nd Images Festival of Independent Film + Video. Mining lost and forgotten voices reverberating inside the institution, Matharu uses event documentation from found videotapes to explore what is missing from the AGO's archive. Remixing found materials that travel outside the museum, on the streets, on community-television and returning back inside the institution she asks, what exactly has or has not changed in the often-misunderstood area of “diversity programming”?

The screening will be followed by a conversation between the artist and Gabrielle Moser about the generation of this work.

Pamila Matharu (b.1973) is an immigrant-settler of north Indian Panjabi-Sikh descent, born in Birmingham, England, based in Tkarón:to (Toronto). As an artist, she explores a range of transdisciplinary feminist issues, blurring the lines between objects, activism, community organizing, and public pedagogies. Her practices include object making (installation, collage, film/video/photography), curating/organizing, artist-led teaching, arts administration/advocacy, and social practice.

Gabrielle Moser is a writer, educator and independent curator based in Toronto. A founding member of EMILIA-AMALIA, she holds a PhD from the art history and visual culture program at York University in Toronto, Canada and is an Assistant Professor in art history at OCAD University.

This is an Accessible Event.