Sara Diamond: How much do we need to understand each other to work together?

"The boundary object is an ethnographic term that describes objects, processes, or words that cross between cultures or disciplines. Boundary objects are often the currency and the result of cross disciplinary practices. All manner of things, from software, to maps, to theories can provide a rich terrain for misunderstanding, tentative agreements or new insights. Case studies of cross-disciplinary art and science collaborations or design and engineering projects will provide examples."

Students enrolled at surrounding universities and institutes are welcome to attend. Transportation for groups can often be arranged and generally involves a ride via Perimeter Institute's Shuttle Van service. 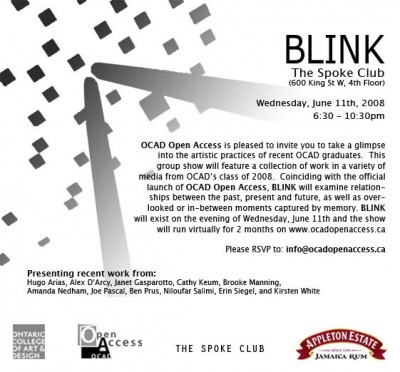 The Spoke Club in Toronto hosts an exhibition of recent OCAD graduate work addressing certain concepts embedded in the metaphysics of time.

This group show features a collection of work in a variety of media from OCAD's graduating class of 2008.

Coinciding with the official launch of OCAD Open Access, BLINK will examine relationships between the past, present and future, as well as overlooked or in-between moments captured by memory.

BLINK will exist on the evening of Wednesday, June 11th and the show will run virtually for 2 months at www.ocadopenaccess.ca.

In Winter 2008, the course "Modern Physics" was offered at OCAD by Faculty of Liberal Studies Instructor Robin Kingsburgh for the first time. In this course, the world of physics was explored, emphasizing physical observations and visualizations of nature, from the realm of the human scale, through microscopic and macroscopic scales. The course examined topics in modern physics including cosmology, relativity and quantum mechanics (without math!), along with their historical contexts. Particular emphasis was placed on the role of visualization in science, and inter-relations between science and art. As part of the course, an assignment was geared towards participating in Subtle Technologies, with the theme of Light.

For the assignment, students had to research a scientific phenomenon involving light. Possible topics included iridescence, wave-particle duality, making the invisible visible (i.e. visualizing parts of the electromagnetic spectrum outside of visible wavelengths) and exploring various optical phenomena like refraction, reflection, polarization and scattering. The students were instructed to research the topic and write a 6-page essay. Following the research they were instructed to create an art piece involving this phenomenon, either literally or metaphorically, as a response to the scientific knowledge they had accumulated during the research process.

These students' works will be on display at the Subtle Technologies Festival of Science & Art, May 29 to June 1 at Innis College, University of Toronto.