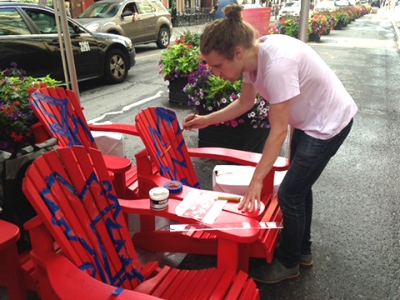 OCAD University partnered with the Toronto Entertainment District BIA (TOED BIA) to bring greater access to the John Street Cultural Corridor with the John Street Pedestrian Initiative (JSPI). For six months a lane will be closed to vehicles and become a pedestrian-friendly space. Rosena Fung and Michael Pitropov, recent OCAD U graduates, re-interpreted 20 red Muskoka chairs with their illustrations. The chairs will remain in place through the fall for pedestrians to lounge in.

“John Street presents a unique opportunity for the city to allow the public to experience part of our civic realm in a whole new way,” said Dr. Sara Diamond, president of OCAD U. “The Entertainment District is going through extraordinary growth and John Street will provide this community with a unique destination not unlike many great cities around the world. We are pleased to be the first to play a role in bringing art to this transformative public space.” The students’ collective efforts, referred to as John Street – Toronto’s Red Carpet will remain on display along the John Street Cultural Corridor until October 12, 2014.

The John Street Pedestrian Initiative’s project area places a focus on the east side of John Street, between Queen and Adelaide Streets, because it has the narrowest sidewalks and the largest number of patios in the corridor. The east curb lane traffic closure positively influences how pedestrians experience and use the street by providing them with a safe, wide pedestrian realm. The separation of the roadway and expanded pedestrian zone will be delineated by new pavement traffic markings, signage, planters and armour stones. In addition, tables, chairs and umbrellas enhance and contribute to the vibrancy of the surrounding area.

The long-term vision for the John Street transformation includes wider sidewalks, continuous double row of trees on the west side and flexible curbs resulting in calmer traffic and greater programming opportunities.

The detailed design is underway and will be completed in 2015. A Class Environmental Assessment Study of John Street was completed in 2012. Programmable lighting, convenient access to electrical conduits and coordinated paving treatments will be some of the many elements under consideration.

The vision for the street is to create a grand promenade connecting visually and physically the key cultural destinations across the corridor. “The long-term vision for the transformation of the street to a beautiful cultural corridor will be kick-started with the launch of the art project in partnership with OCAD U,” said Janice Solomon, Executive Director, Toronto Entertainment District BIA.

The City Staff report on the John Street corridor project can be found here.

The John Street Cultural Corridor, from north Queen Street West to south of Front Street West, is recognized as a route of civic and cultural importance in the City, encompassing major facilities and institutions including the Art Gallery of Ontario, OCAD U, Bell Media, the National Film Board of Canada, the CBC Broadcast Centre, the Princess of Wales and Royal Alexandra Theatres, the TIFF Bell Lightbox, Roy Thomson Hall, Metro Toronto Convention Centre, CN Tower, Rogers Centre, Ripley’s Aquarium of Canada, Air Canada Centre, Steam Whistle Brewing and the National Rail Museum at Roundhouse Park. City Council, in considering plans and studies of this area at various times over a number of years, has designated or identified John Street as a “Cultural Corridor,” an “Avenue of the Arts” and a “Pedestrian Priority Route.”

Mali & Georgia has been added to the The Birds & the Bees programme which screens every 10 minutes on September 10, 2013 at all subway platforms. Stan's film will be screened once every 100 minutes all day along with 9 other films in the same program. In addition, the program will be running continuously every 10 minutes at the TUFF Film Zones located at Bloor Station, St. Andrew Station and Dundas Station.

The films will go live on the TUFF website on September 3 and online voting for Audience Choice will begin on September 4.

Finally, if you are local, we invite you to attend the TUFF Closing Party & Awards Ceremony on Sunday, September 15th, 7-10 p.m. at The Drake Hotel in Toronto. A great party with amazing food and drink; all official selections are screened, and prizes are presented to our various award winners.

Seven Hours of Rat Drawing in One Minute from Stan Krzyzanowski on Vimeo.