Toronto-born, internationally-exhibiting artist, Paul Aloisi, works across several disciplines including mixed media/collage and sculpture/installation. His current work explores human interaction and communication through investigations of public space, architecture, text and their relationships. He frequently works in the public realm; his projects have engaged the public and required their participation. Through experience of his work he aims to reveal the participant's impact on and connection with public space and the social collective.

I think when ordinary working people come home, turn on the TV and see a gala of a bunch of people at, you know, a rich gala all subsidized by taxpayers claiming their subsidies aren't high enough, when they know those subsidies have actually gone up – I'm not sure that's something that resonates with ordinary people, Stephen Harper said in Saskatoon, where he was campaigning for the Oct. 14 election.

The artist collective Ordinary People rejects the recent statements made by Prime Minister Stephen Harper and calls upon ordinary people to show their support of the arts.

Join us in a public action during Nuit Blanche.

At midnight on Saturday, October 4, we ask you to STOP for 4 minutes 33 seconds and hold up a piece of paper displaying the word ART. (John Cage, 4’33”).

The artist collective Ordinary People believes that everyone benefits in a society that respects and promotes culture. 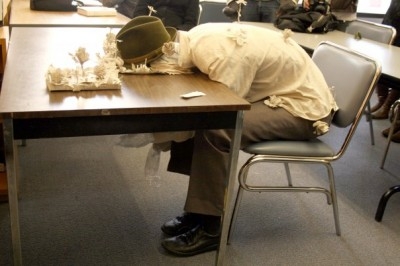