The AIMIA | AGO PHOTOGRAPHY PRIZE SCHOLARSHIP PROGRAM: Awarding students for extraordinary artistic potential who are studying towards bachelor degrees with a major or focus in fine art photography.   Each year, this program awards three $7,000 CAD scholarships!!

Terms of Eligibility:
- Open to all Full-time 3rd year students working with photo who are entering their final year of study.
- Submissions may include photo, video, photo-based installation, and lens based artwork.

What does winning the scholarship include?
- THREE $7,000 scholarships toward tuition for the final year of study.

Artistic Criteria:
Each year, this program awards three $7,000 CAD scholarships to undergraduate students who are entering their final year of study at select Canadian academic institutions.
Each academic partner institution will form a jury of three faculty to review their students' submissions and select one finalist. The finalists will be evaluated by the Scholarship Program jury, consisting of two representatives from the Art Gallery of Ontario and a previous winner of the Aimia | AGO Photography Prize. Each year, the jury will select three winners, who will each receive $7000 CAD. Additionally, the home institutions of the winning students each receive $1000 CAD honorariums.

The winning students, finalists and faculties will be notified of the jury’s selections in June 2016. A press release will be issued announcing the 3 winners, with a link to their works on the prize website. Winning students must be willing to attend a special event in Toronto, scheduled by Aimia and the Art Gallery of Ontario. 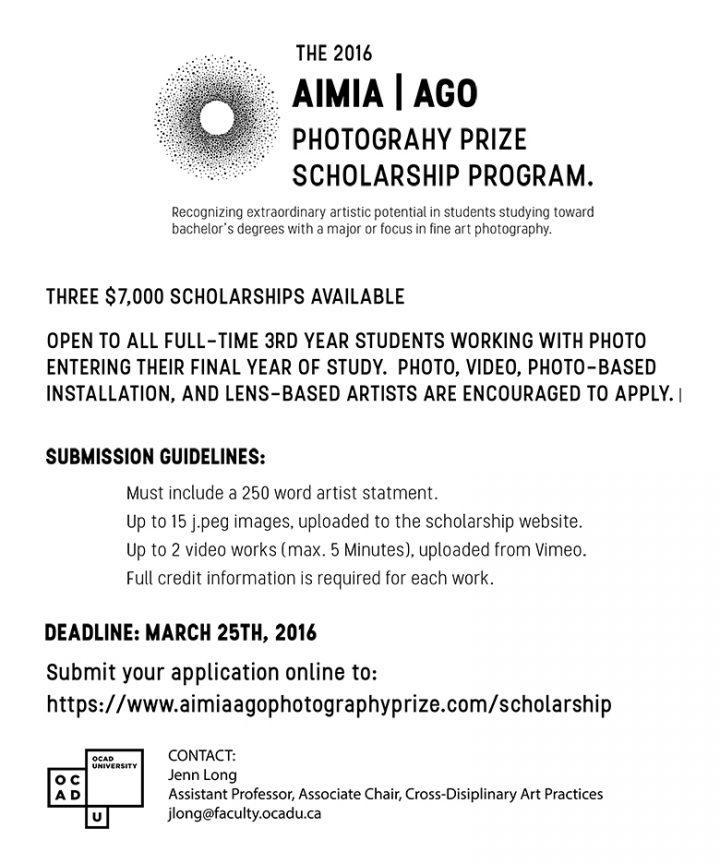 The scholarships will be renewed based on the students’ academic standing and fulltime enrolment.

“We are grateful to BMO Financial Group for establishing these renewable scholarships which will have a tremendous positive impact on the student experience,” said Dr. Sara Diamond, President and Vice-chancellor. “The recipients will benefit from stable financial support right through to graduation.”

BMO Financial Group has been a champion of OCAD University for over 25 years, generously supporting student talent, signature events and special projects. This latest contribution will allow more students to pursue their passion for careers in art, design and digital media.

Established in 1817, BMO Financial Group is a highly diversified financial services provider based in North America. With total assets of approximately $672 billion as of July 31, 2015, and more than 47,000 employees, BMO provides a broad range of retail banking, wealth management and investment banking products and services to more than 12 million customers and conducts business through three operating groups: Personal and Commercial Banking, Wealth Management and BMO Capital Markets. 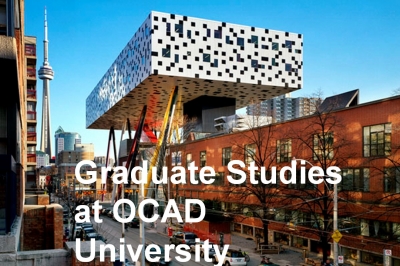 Interested in applying for an SSHRC (Canadian Graduate Scholarship) and/or an Ontario Graduate Scholarship (OGS)? This session will provide students with further information about competitions, timelines and best practices. These are prestigious awards and all full-time graduate students are encouraged to apply.

Please RSVP to abrummell@ocadu.ca to reserve your spot!

Interested in applying for an SSHRC (Canadian Graduate Scholarship) and/or an Ontario Graduate Scholarship (OGS)? This session will provide students with further information about competitions, timelines and best practices. These are prestigious awards and all full-time graduate students are encouraged to apply.

Presented by: The Office of Graduate Studies

For further details about scholarships and funding please visit:http://www.ocadu.ca/academics/graduate-studies/current-students/funding.htm

Accessibility: Accessibility is important to us. If you require accommodations due to a disability in order to participate fully in this event, please email us at abrummell@ocadu.ca so we can make the appropriate arrangements.

Remote Access: If you wish to attend this workshop via GoToMeeting please email us and we will circulate the meeting invite link.

Please RSVP here if you plan to attend to abrummell@ocadu.ca 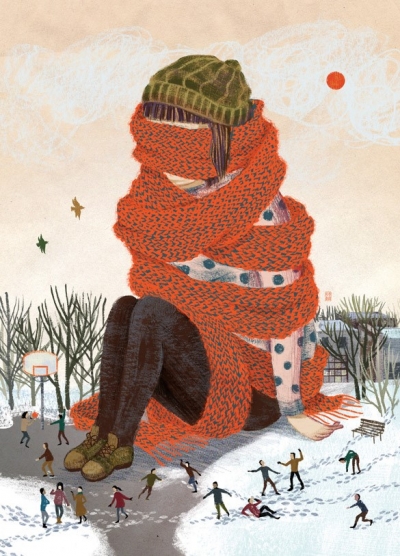 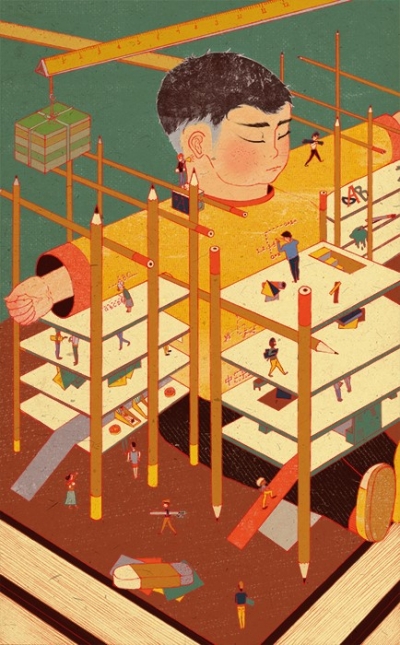 The North American illustration industry has recognized OCAD University students with a plethora of awards in recent weeks.

Meanwhile, an international jury of creative directors at American Illustration chose two pieces by fourth-year student Deshi Deng and one by Miranda Ly to appear on their website, while Creative Quarterly 39 chose as runners-up third-year students Jonathan Godfrey and Koko Lee, and fourth-year students Paige Clark, Justus Buenaflor, Janny Woo and Alejandra Paton. The Canadian Association of Professional Image Creators (CAPIC) also recognized work by Alejandra Paton and two works by third-year student Sienna Cho, among their Rodeo 7 runners-up. An Awards Gala in Toronto will be announced by CAPIC shortly.

The Foundation was formed by a partnership of advertising agencies, the AAABC, friends and family of James Lee, and has been awarding $5,000 scholarships since 2008. Lee was a copywriter for the award-winning agency DDB Canada. 2008 Illustration alumna Shen Plum was the first recipient of the Foundation scholarship. 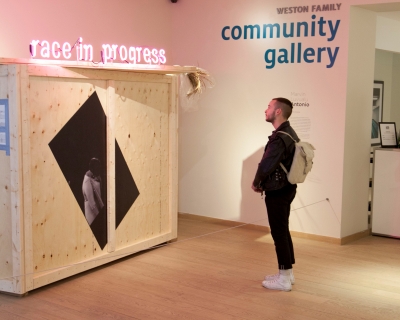 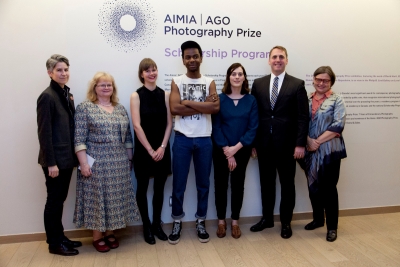 OCAD U Photography student Marvin Luvualu Antonio is one of three recipients of the Aimia | AGO Photography scholarship currently exhibiting at the AGO. Antonio’s work will be on display in the Weston Family Learning Centre Community Gallery through the end of January 2015

Part of the prestigious Aimia | AGO Photography Prize, this inaugural $7,000 scholarship will be applied towards tuition for Antonio's final year of undergraduate studies at OCAD U. He is joined by Kristiane Church from the University of Manitoba and Paige Lindsay of Ryerson University’s School of Image Arts.

Bottom photo from left to right: 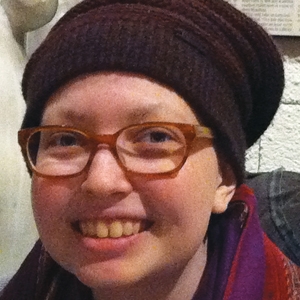 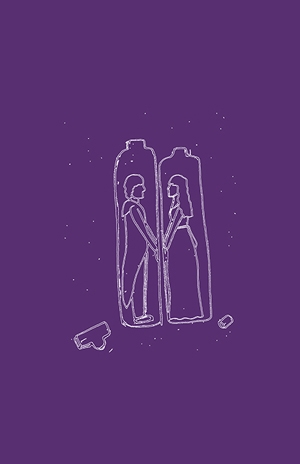 Graphic design student Mariah Unger achieved her goal of attending OCAD U, but was unable to realize her dream of studying abroad for a semester, as part of th Student Mobility/Exchange Program. She passed away in January, 2012 — just four weeks before she would have turned 20 — as a result of complications from lymphoma, a type of cancer. Now, however, a new scholarship created in her memory by her parents will make it possible for other OCAD U students to fulfill their dreams of studying abroad.

Beginning with the 2014 winter semester, Mariah’s Fund will help one graphic design student each year with the costs of studying abroad. Students will be selected based on strong academic standing in liberal arts, creativity, talent and passion.

"The ideal recipient for Mariah’s Fund will be a student who holds the same characteristics as Mariah — someone with the same quiet determination and drive that she had,” says Philip Unger, Mariah’s father, a graphic designer, the founder of Method Branding and an instructor at OCAD U. “When she was going through chemotherapy she was still concerned about handing in her assignments on time. She was really passionate about her studies. She was proud of what I did, but she was her own person and wanted to do this on her terms, on her own.”

Unger says that receiving acceptance to OCAD U was one of the happiest days of Mariah’s life. “She was literally singing and dancing for days afterwards.” He says she attended classes throughout her treatments as an integral part of her struggle to not let cancer define her.

An outpouring of support

When Unger began raising funds for the scholarship, together with the assistance of Rose Anne McCants, Stacy Kelly and other staff from the OCAD U Development Office, his original goal was to raise $21,000, to commemorate what would have been Mariah’s 21st birthday. Friends, family, people from the OCAD U community, Unger’s professional contacts and others rallied around the Unger family in support, many donating in denominations of 21, and some pledging annual donations. The fund, which to date has raised close to $57,000 — its initial target several times over — is still open for contributions. The more it raises, the more students it will be able to assist.

In addition to an initial start-up amount, Unger and his family made an initial contribution so that the fund would be able to start assisting students sooner, in the winter, 2014 semester. The latter donation was made in honour of Michael Desjardins, Mariah’s favourite teacher at OCAD U, who is in hospital after a serious bicycle accident a year ago.

“Mariah’s Fund will be here long after we’re gone,” says Unger. “The fund will be here a hundred years from now, and that’s something we couldn’t have done without the generosity of a lot of people, both from within the OCAD U community, and those from outside OCAD U. I am humbled and amazed by how many people care.”

Application details will be available soon on the Scholarships & Awards page 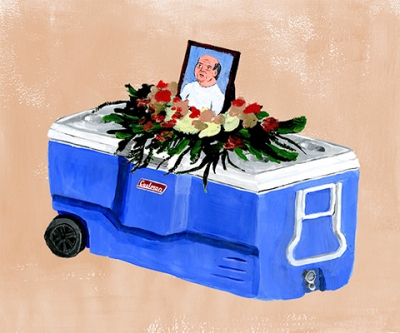 Fourth-year Illustration student Brandon Celi has been selected to receive the “The Illest of Illustration” $200 scholarship for his work Cold Storage. Celi was shortlisted in February from more than 8700 entries submitted by professors of university students from around the world.

Celi will receive his award during the Society’s awards ceremony on Friday, May 9.