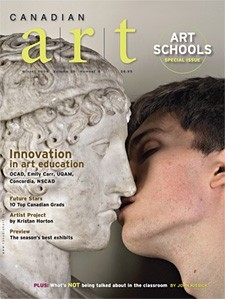 Join Canadian Art as we launch our first-ever education issue, featuring stories on major art schools across the country.

Included are reports on Emily Carr University in Vancouver, UQAM and Concordia in Montreal, NSCAD in Halifax and OCAD in Toronto. Plus: Art departments across Canada, new programs in curatorial studies worldwide and 10 of this year’s top art grads.

This issue is chock-full of topical lessons on the state of art education in Canada.

Writer Gary Michael Dault examines the future of the newly renovated Nova Scotia College of Art and Design in Halifax and Winnipeg artist Paul Butler writes about his new residency at the Banff Centre that reimagines art training in terms of communal workshops.
In Toronto, Noah Richler discusses the impact of creative-economy theories on the Ontario College of Art and Design with president Sara Diamond and author Richard Florida, and University of Guelph fine art program director John Kissick offers his perspective on art departments at major Canadian universities, accompanied by a special artist project by Kristan Horton. For an international perspective, artist and writer Eldon Garnet reports from Italy on an international conference about new university programs in curatorial studies.

As a special addition to the issue, art columnist Leah Sandals surveys a cross-section of this year’s art school graduates on how their schools have influenced their art practices. 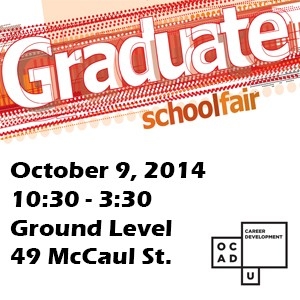 Connect with a variety of schools from Canada, the U.S. and the UK to find out more about a wide range of graduate education program offerings.

Explore your graduate school options! Faculty, staff and program directors from fifteen participating schools will be available to answer your questions!

A full list of participating schools can be found here:

To prepare, come out to our upcoming info sessions: