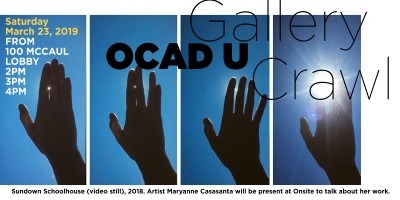 Visit the OCAD University art district for the second annual Gallery Crawl!
Featuring special programming at our eight galleries. Artists and curators will be present to introduce their work.
Join a free guided tour departing from the 100 McCaul St. lobby at 2pm, 3pm & 4pm.
RSVP: tneuspiel@ocadu.ca 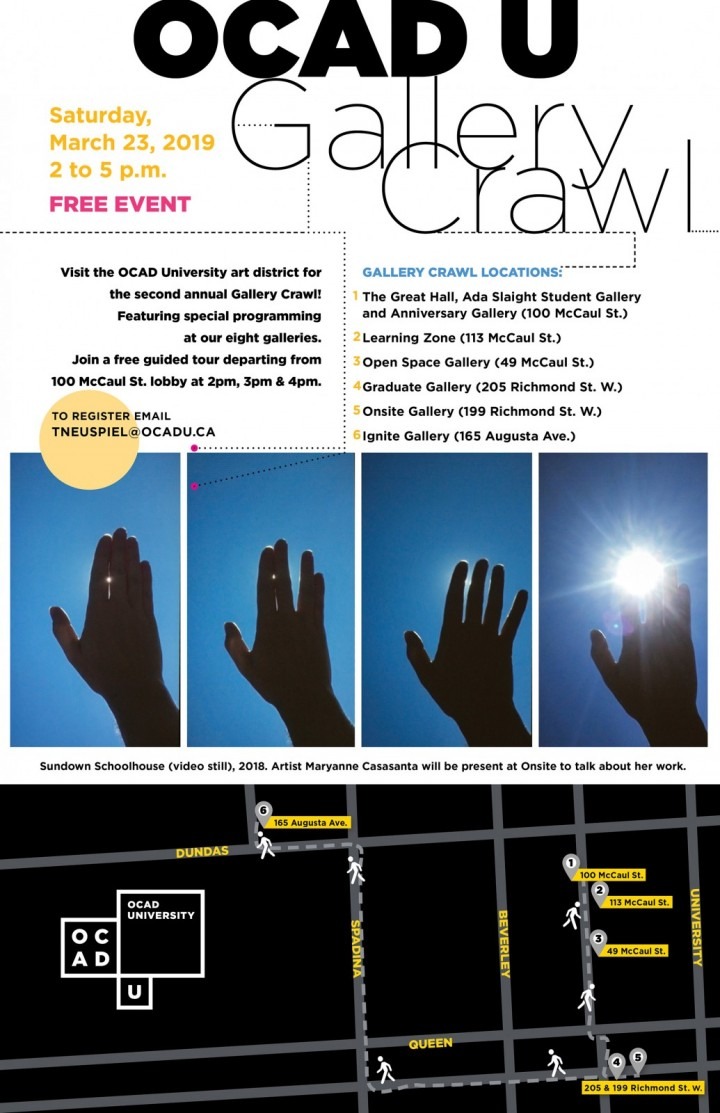 #RadicalBlackQueerJoy (The Entanglement of Art & Activism

This BLM course will explore the intersection of art

and activism through dialogue with artists from

Canada and England. This special class is open to the

Our opening speaker will be Toronto-based professor

University, who brings a deep experience of being an

educator, artist and activist from Canada.

Our featured international guest speaker will be

archive curator/activist, whose work has been shown

in galleries, museums and alternative spaces

nationally and internationally. Ajamu is supported by

Musagetes for this special discussion in Toronto.

On Friday November 21, 2008, OCAD Time Based Media students will muster their digital skills and set out – laptops and digital cameras in tow – on a custom built quest, dubbed Search Engine. Given a single tantalizing clue that alludes to a continuous narrative – students must decode the clue, and launch their search for a series of digital image fragments.

Each found picture fragment will be emailed via OCAD’s wireless network to a home base from which the university's students will receive their next clue.

Over the course of the semester these first-year students will have honed their techniques using digital video and still cameras, graphics editing in Photoshop, web site construction and interactive digital media. Search Engine will maximize this new familiarity and further engage students with the facilities and community that OCAD has opened to them. At the end of their search, students will gather their digital fragments and assemble them to form a whole image – an allegorical narrative that illuminates what they have learned. Search Engine will culminate in a gathering in OCAD's Main Lobby on Friday, November 21 at which the composite images will be displayed. The images will be creative representations of the original image due to different methods and angles in the image capturing and compositing process.

The OCAD Student Union is proud to invite you to their annual Year End Student Retrospective. This curated selection of work showcases a diverse array of contemporary issues, as well as lighthearted elements of wit and whimsy, and all things in between.

Featuring nearly 100 artists and designers from all years and departments, this exhibition aims to provide a glimpse into some of the amazing work being done at OCAD. The Student Union wishes to use this opportunity to extend their congratulations and recognition to the entire student body. 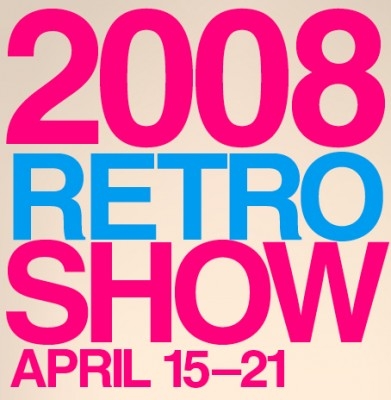 The OCAD Student Union invites all OCAD students to submit work for consideration towards a student retrospective exhibition. We are looking for Art & Design of all types from every program as well as documentation from student groups and events.

The Retrospective will be in the Great Hall from April 15 to 21 with an opening reception on Thursday April 17, 6 to 9 pm. All are encouraged to
attend.

Be sure to have all submissions sent in by Monday April 7!

Please do not reply to this email.
Send your submissions to OCADevents@gmail.com, and be sure to include the following information:

When submitting, please include "Retro-Submission" in the
subject line of your email.

We greatly appreciate any immediate replies. Thank you and we look forward to seeing your work.

The Great Hall showcases the accomplishments of this year’s first-year students with a week-long exhibition and series of exciting events. Take this opportunity to recognize the fabulous imaginations and acuity of this year’s first-year students and their works. Events highlight environmentally friendly art, wearable art, performance and new media. Be sure to check it all out!

Search Engine:
A high-tech scavenger hunt culminates in the reassembly of a familiar work of art as teams of students, armed with digital cameras and laptops comb the campus for clues and fragments that they will email back to their headquarters. Organized by faculty member Nancy Paterson. 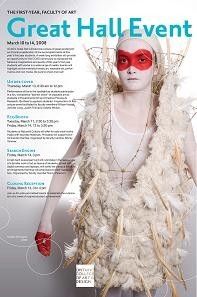 Inside an Art Battle

Art Battle is a global live painting competition that pits a group of artists against each other to see who can produce the best painting within the allotted time. In 2009, Art Battle arrived in Toronto and held its first competition in The Great Hall (1087 Queen St. W). Today, The Great Hall hosts a monthly Art Battle with world-class artists. I checked out a recent Art Battle to show you what these exciting events are all about. 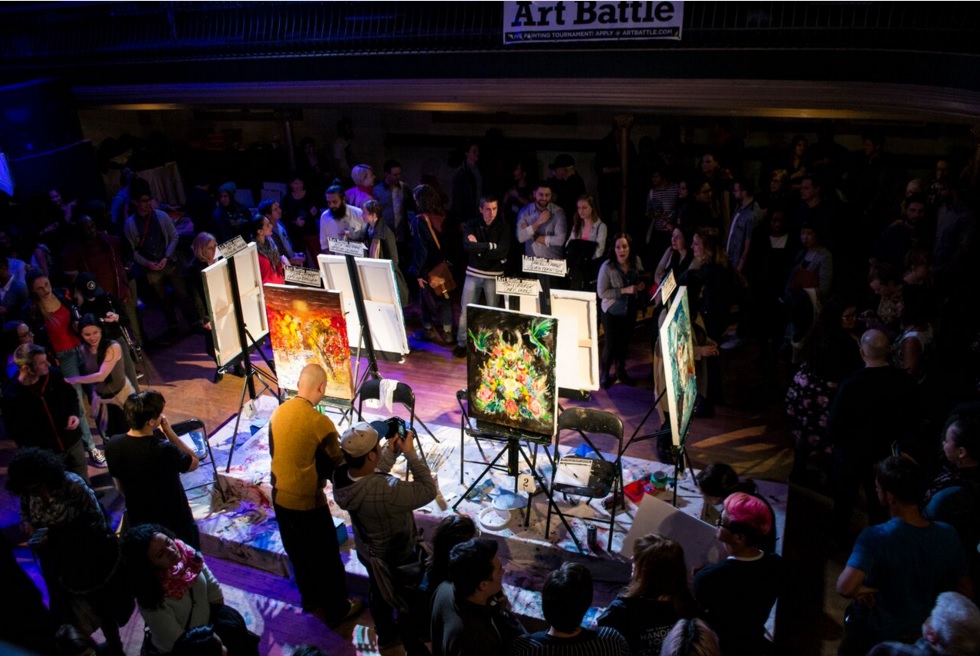 The event begins with all spectators receiving a ballot slip. This is because the audience decides the winner of an Art Battle. Whoever gets the most votes after a round is declared the winner. 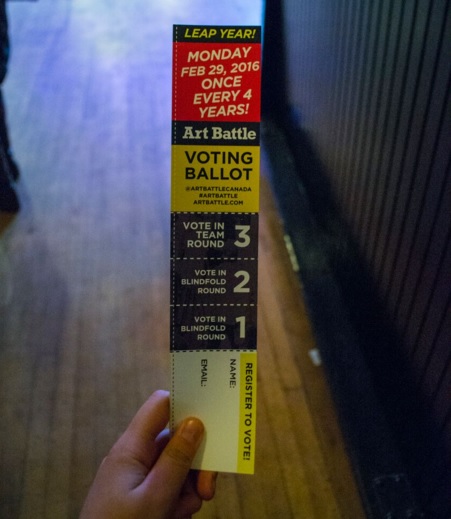 The setup involves an ensemble of canvases side-by-side in the middle of the floor. This allows the audience to rotate around and look over the shoulders of artists as they’re painting. 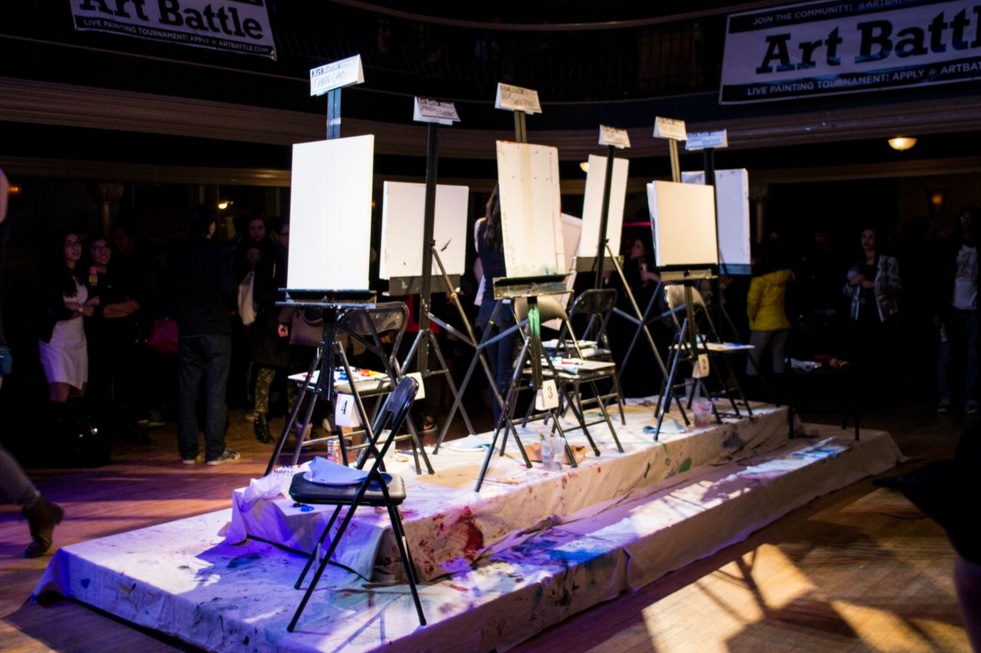 Art Battles are usually 20-minute rounds with one painter per canvas. However, sometimes there’s a spin. These rounds allow teams of two painters to combine visions for a total of 30 minutes.

All the artists are given access to the same brushes and acrylic paint. No extra tools are allowed, and colours have to be mixed on-the-go. The variety of artistic styles at Art Battle range from hyperrealism to highly abstract, so you’re bound to like something no matter your taste.

And it has begun! 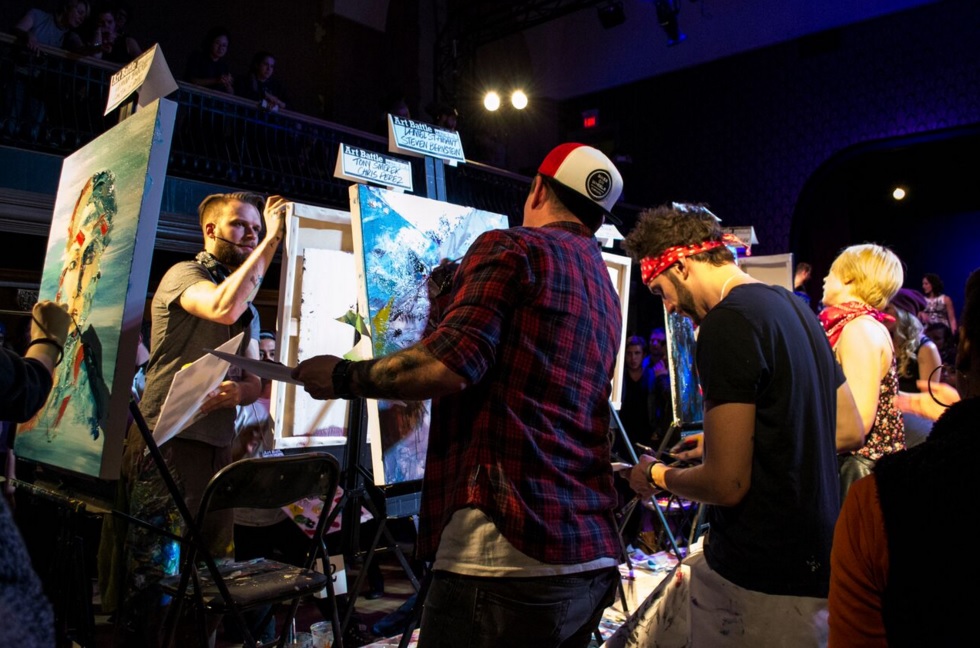 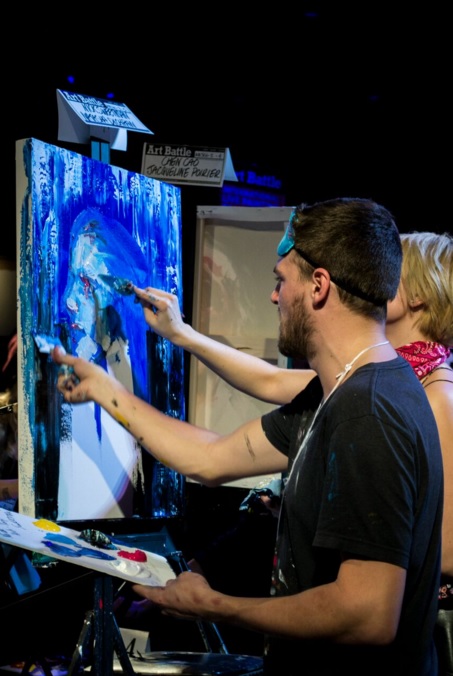 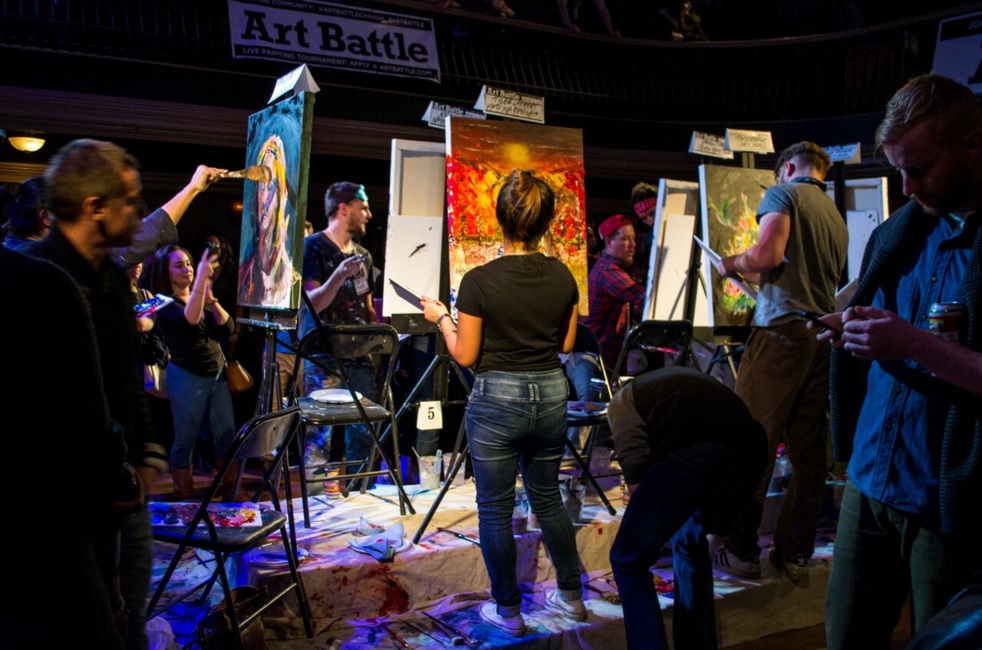 With the painting part of the round now over, audience members are free to peruse and decide which painting they think deserves to win. All paintings are then put into a silent auction for bids from the audience. Here are the final pieces: 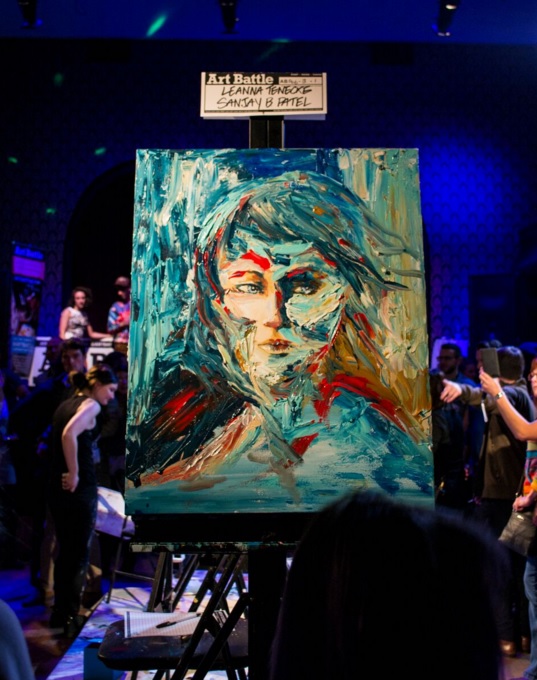 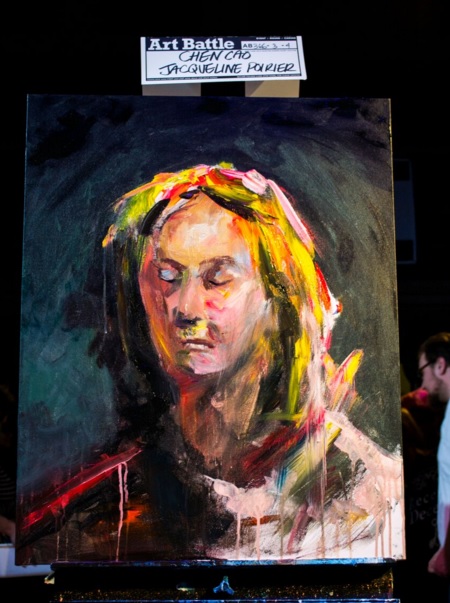 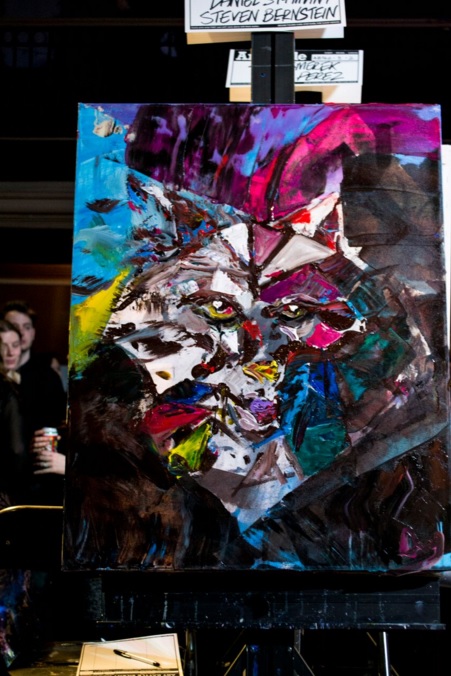 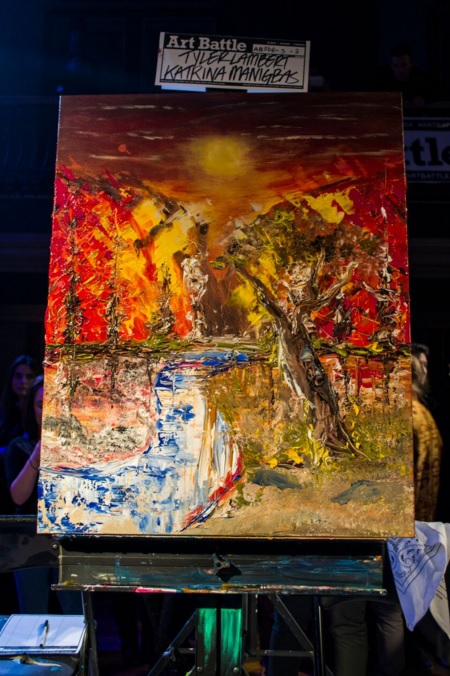 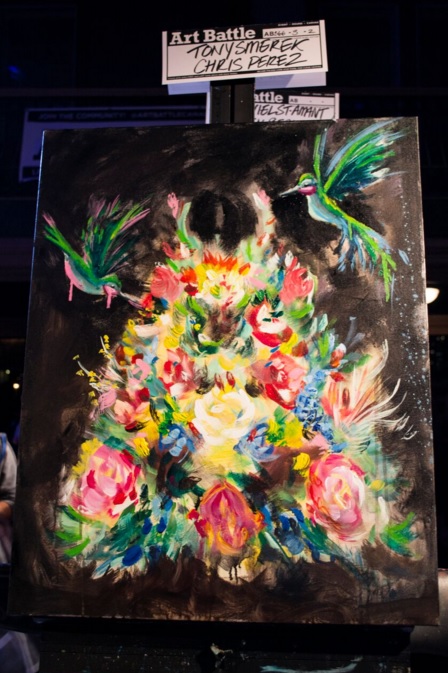 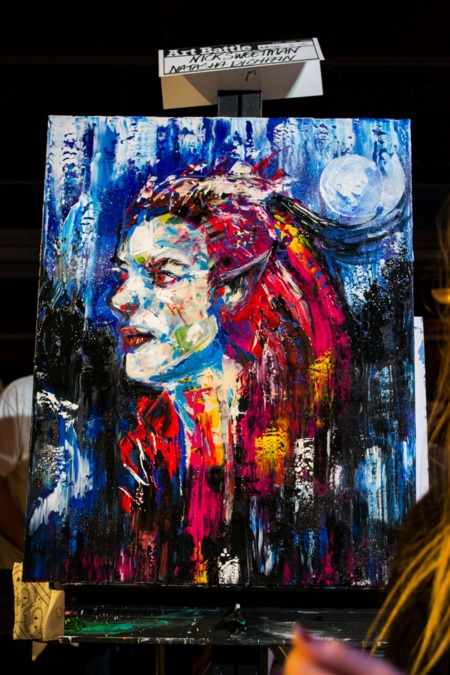 Artists grab a beer and show off their other talents, such as breakdancing, to kill time while the crowd casts their votes. 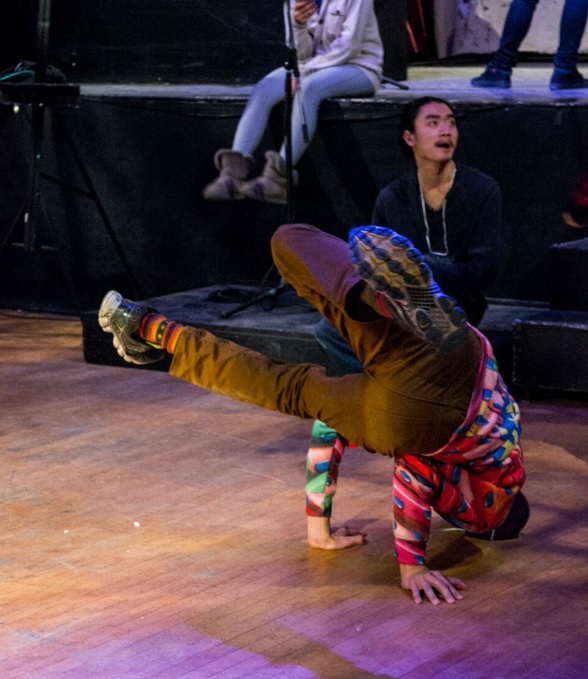 The winner is announced. Congratulations to Leanna TenEycke and Sanjay B. Patel!