The Social Body Lab offers a residency opportunity to select makers from diverse backgrounds. This gives residents access to the lab facilities and community while the residents bring new ideas and practices in the lab. 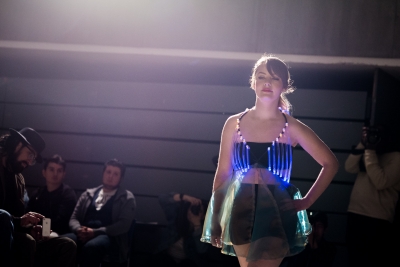 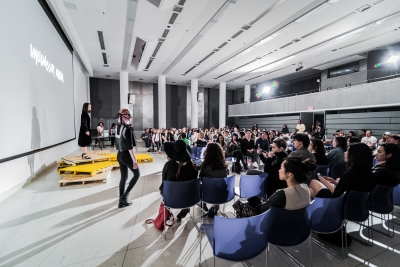 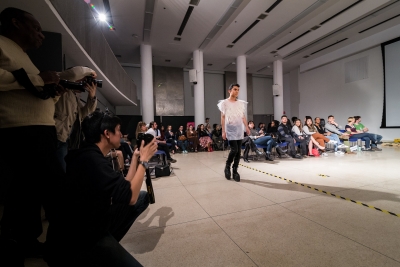 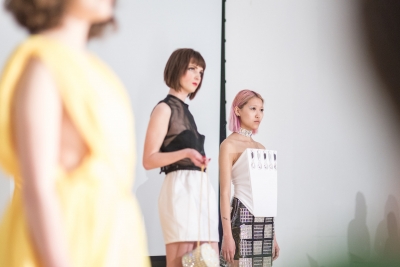 OCAD University’s auditorium was transformed into a quasi-catwalk on Friday April 22 for Not Just a Fashion Show. The event spotlighted 100 wearable works of art created by 23 students from 12 programs. Mirrored masks, sparkling crystals and LED-infused fabrics added a glow to the outfits, which ranged from whimsical to highly functional.

The high-energy student-led project was developed and curated by Ali Haider (Graphic Design) and Jasmine So (Industrial Design) with support from faculty members Tarah Burke and Dorie Millerson and funding from the Office of the President.

Student models wore the outfits by designers from across all three faculties:

Not Just A Fashion Show 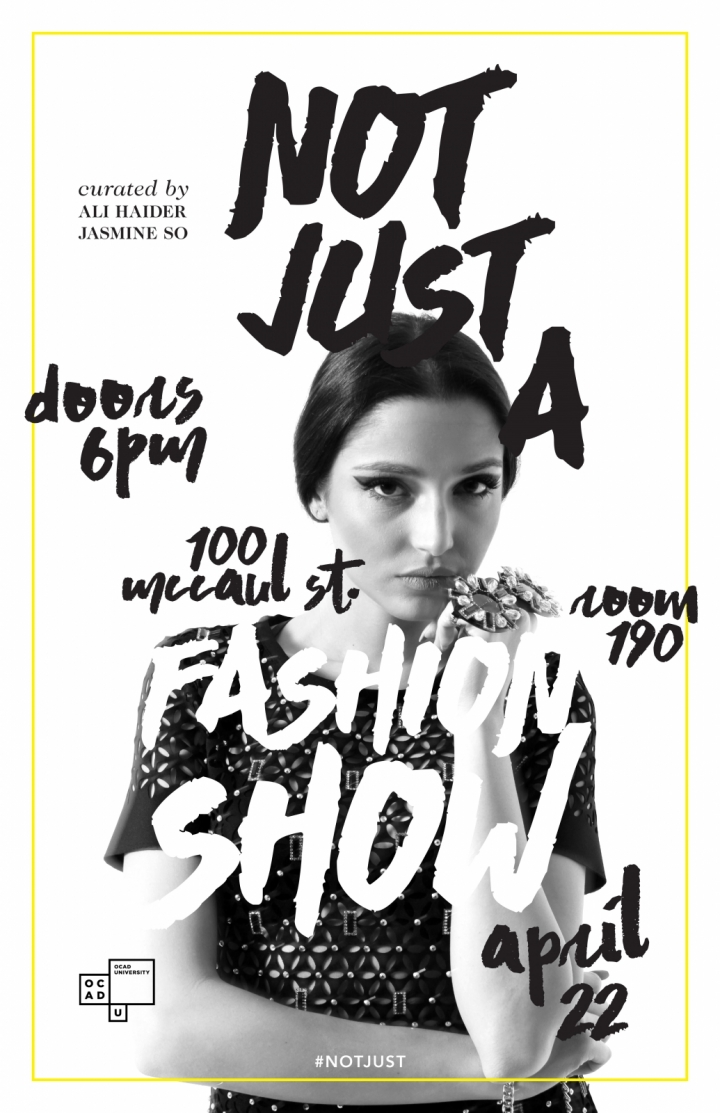 The Toronto Wearables Meetup is a monthly lecture series and gathering of people interested in wearable technology, fashion, wearable electronics, soft circuits, electronic textiles, emerging materials, and other creative and innovative approaches to things that live on the body. This Meetup is a gathering for artists, fashion designers, industrial designers, textile enthusiasts, engineers, researchers, students, and anyone interested in these emerging and intersecting fields.

AmpGear is a 3D printed prosthetic hand with interchangeable attachments. It aims to completely shift the paradigm of limb replacement from the current, strictly bound, and nearly obsessive aim to replicate hand function, towards an open discourse of prostheses as accessory tools. This project involves the use of 3D printing technology to allow for the prosthetic hand and its attachments to be quickly and cheaply printed at home with a desktop 3D printer, such as the Makerbot, or through a local 3D printing service.

Rickee Charbonneau is a recent graduate of the Digital Futures undergraduate program at OCAD U. As a digital media designer, Rickee is especially interested in the use of new and upcoming technologies (ie. 3D printing, wearable technology, game design) to creatively solve challenges.  As a student in the Inclusive Design masters program at OCAD U, Rickee’s current research interest is in eHealth and mHealth applications and how they can be inclusively designed to be more broadly adopted by users.

Peak Skis is an R&D project at Normative focussing on the development of sensor-enhanced, network-ready skis capable of measuring various aspects of the skier’s performance. Ken will discuss the experience of developing both the physical ski prototypes and an accompanying mobile app for skiers, as well as the challenges around designing software which networks with sensor-enabled devices — such as determining what data is most meaningful to measure, how to integrate mobile app design with hardware design, and designing an experience that is ambient and seamless.

Ken is a multidisciplinary designer from Toronto with a passion for creating meaningful interactive experiences across a variety of mediums: from web and mobile software, to smart environments, wearable tech, and physical computing. He has worked for over 8 years as both a designer and software developer in a variety of corporate, healthcare, and academic research environments. He also studied Industrial Design and Digital Media at OCAD University, and holds a Psychology degree from the University of Toronto.  Ken currently works as an interaction designer at Normative, in Toronto. 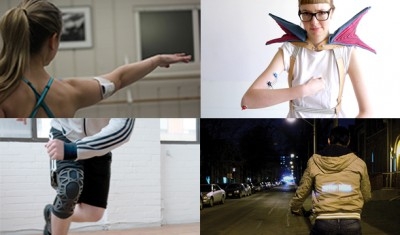 This final meetup of the 2013-2014 academic year will feature a series of OCADU wearable tech projects from the Imagination Catalyst and the Social Body Lab. Projects include Loretta Faveri’s SoMo , a wireless wearable sensor board developed for dancers; Robert Tu’s MeU, a smartphone-controlled, flexible LED display; Mike Vaughan’s Lynxio, a knee brace that transmits wireless data on corrective body positioning to a physiotherapist; and a series of conceptual wearable projects developed by the research team in OCAD U’s Social Body Lab over the past year: a hood that deploys itself with a shoulder shrug; a wearable body compass that warms in the direction of “home”; and expansive shoulder pads actuated by muscle flexion.

North Paw is a compass anklet created by Sensebridge that vibrates to tell the wearer which way is North. It provides a haptic sense of direction. Customers purchase the North Paw kits, which they have to solder together themselves. From 2009 to 2010, Eric bought parts and stuffed kits for North Paw himself, in his bedroom. In the fall of 2010, he began working with a Chinese company to have the kits made in China. As with all manufacturing, the devil was in the details. In this talk, Eric will discuss the process of having a product “made in China”.

Eric Boyd is the founder of Sensebridge, a wearable electronics company., and is President of hacklab.to, a technology community space.

Alex Haagaard is a designer and artist based in Toronto. She received her M.Des. in Interdisciplinary Design from OCAD U in 2013. Alex works at the interstices of science and technology studies, industrial design and jewellery design. Her main research interests lie in the design of medical and assistive devices, in particular, participatory design approaches to engaging with the conflicting needs of the multiple user groups involved with medical things. She is currently continuing with research related to her M.Des. thesis project, and is planning to pursue a Ph.D. at Lancaster University, studying the epistemic and sociological implications of the situated boundary role of medical identification jewellery.
The Toronto Wearables Meetup is a monthly lecture series and gathering of people interested in wearable technology, fashion, wearable electronics, soft circuits, electronic textiles, emerging materials, and other creative and innovative approaches to things that live on the body. This Meetup is a gathering for artists, fashion designers, industrial designers, textile enthusiasts, engineers, researchers, students, and anyone interested in these emerging and intersecting fields.

Elizabeth Elliot, Textile Artist
Elizabeth (Libs) Elliott is a textile artist taking a forward-thinking approach to merging technology with traditional craft by using generative design to build handmade quilts. The importance of craftsmanship, respecting the past and looking to the future are all reflected in her work. She studied Material Art & Design at OCAD University in 1996 and continues to live and work in Toronto, Canada. Most recently, her work has been featured on Gizmodo.com.

Rod Fitzsimmons Frey, GUILD Eyewear
Guild Eyewear is a Toronto-based company that provides you with the tools to create your own one-of-a-kind glasses and sunglasses. Using custom in-browser software, customers can use a photo of their face along with specific measurements to customize the outer frame, lens, or arm of a pair of glasses. Customers can also choose colours, patterns, hinges and lenses to create a pair of glasses that are uniquely their own. Glasses frames are then CNC-milled, assembled and mounted with lenses, and then shipped directly to the customer.

The Toronto Wearables Meetup is a monthly lecture series and gathering of people interested in wearable technology, fashion, wearable electronics, soft circuits, electronic textiles, emerging materials, and other creative and innovative approaches to things that live on the body. This Meetup is a gathering for artists, fashion designers, industrial designers, textile enthusiasts, engineers, researchers, students, and anyone interested in these emerging and intersecting fields.