This panel discussion is co-hosted by the Writing and Learning Centre and the Office of Graduate Studies. It will feature talks and advice from recent OCAD U graduates. It will be an opportunity for current graduate students at various stages of their work to acquire and share insights and strategies on the Thesis and MRP process.

At the end of the panel, Alice Brummell from the Office of Graduate Studies will review formatting requirements and dates regarding the Final Submission process. 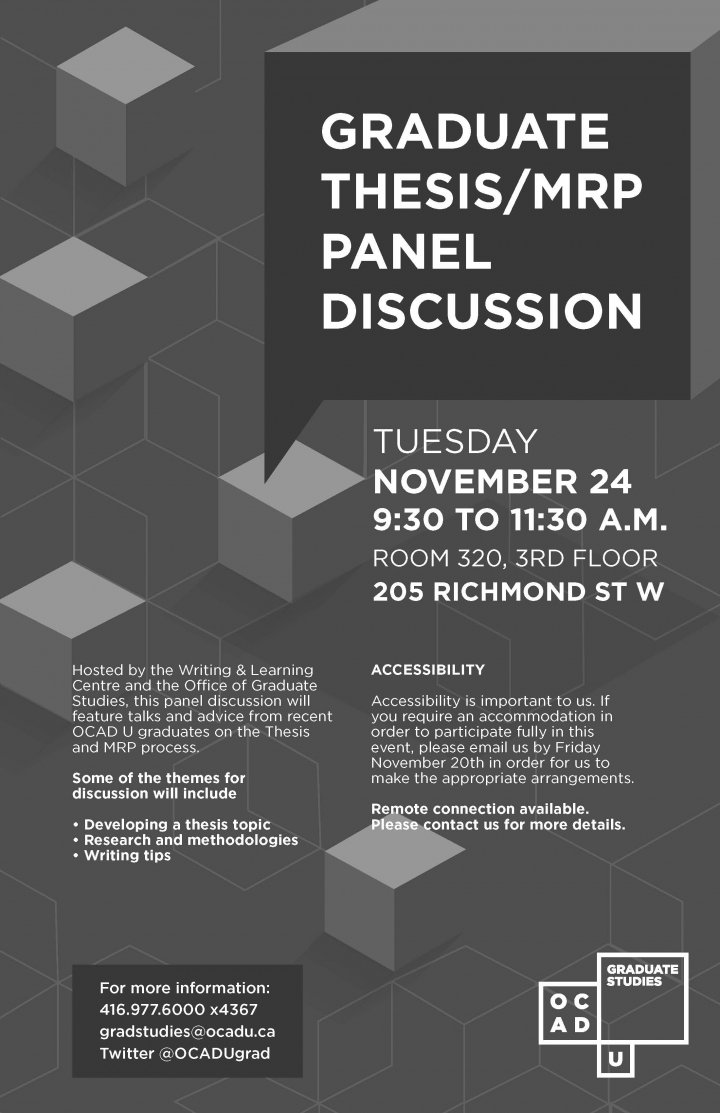 Abstract:
The "lexical approach" is an approach to language teaching which focuses on the importance of the mastery of "lexical bundles" to fluency in all modalities. In academic writing, the use of lexical bundles is highly specialized and discipline specific. Research has shown that one of the ways that academic writing by first and second language writers differs is in the use of lexical bundles.  In this talk, two university program administrators demonstrate the effectiveness of a lexical approach to one-on-one work with second language writers at the university level. Leora will focus on the use of the approach as a means to improving fostering critical thinking while Rebecca will focus on the benefits of focusing on lexis as a way of addressing apparent grammatical difficulties. Both will reflect on ways that this approach allows them to bring together work on language and content in the context of one-on-one work with students. They will also touch on their successes sharing the essentials of this approach with tutors and instructors who do not have specific language teaching experience.

Hosted by The Writing & Learning Center and the Office of Graduate Studies, this panel discussion will feature talks and advice from recent OCAD U graduates. This will be an opportunity for current graduate students at various stages of their work to acquire and share insights and strategies on the Thesis and MRP process. At the end of the panel, the Office of Graduate Studies will review the formatting and final submission process.
Some of the themes for discussion will include:

ACCESSIBILITY: Accessibility is important to us. If you require an accommodation in order to participate fully in this event, please email us by Friday November 21st in order for us to make the appropriate arrangements.

Learn new strategies to organize your time and work.

The organizing of your time, energy and resources is an important part of student life. In this workshop, we will engage in hands-on activities to help you set realistic goals, gain insight into your personal work style, manage your stress and develop a personal schedule.

Susan Ferguson at the Congress of the Humanities and Social Sciences

Susan Ferguson, Manager of OCAD University’s Writing & Learning Centre and Centre for Innovation in Art & Design Education presented her paper “Embodied Writing and Decolonizing Knowledge Production” at the annual conference of the Canadian Sociological Association last week. The conference is part of the larger Congress of the Humanities and Social Sciences, held at Brock University.

Ferguson’s presentation was part of a roundtable session featuring contributors to an edited collection entitled Embodiment, Pedagogy and Decolonization: Critical and Material Considerations. The intention of the book is to consider how embodiment and embodied learning are taken up in pedagogical and decolonization theories and practices.

Abstract: “Embodied Writing and Decolonizing Knowledge Production”
This paper explores the possibilities of embodied writing for social research and its implications for decolonizing knowledge production about and of the body. While there has been considerable interest in issues of subjectivity and embodiment in social research, much scholarly writing about the body, health and subjectivity maintains the normative orders of Western academic knowledge production through its reliance upon dominant understandings of embodiment and writing practices that (re)produce disembodied relations to text. Drawing on my research regarding the social production of bodily pain, I will describe how I brought together feminist autobiography, phenomenologically-informed interpretive sociology and mindfulness meditation to develop an understanding of embodied writing practice and consider how it can support a project of decolonizing knowledge production. 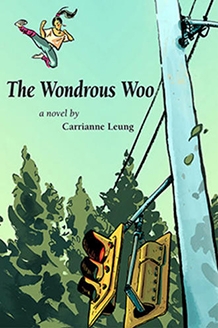 Writing and Learning Services Coordinator and Sessional Instructor Carrianne Leung’s book, The Wondrous Woo, has been shortlisted among 5 finalists for the 40th edition of the Toronto Book Awards.

The Wondrous Woo tells the story of Miramar Woo who is the quintessential Chinese girl: nice, quiet, and reserved. The eldest of the three Woo children, Miramar is ever the obedient sister and daughter ... on the outside. On the inside, she’s a kick-ass kung fu heroine with rock star flash, sassy attitude, and an insatiable appetite for adventure.

Leung is being recognized alongside impressive company. The other four finalists are:

In celebration of the 40th anniversary of the awards, each shortlisted book has also been paired with a Toronto champion who will promote the book and provide an introduction at the awards ceremony. Champions include television personality Elaine Lui (The Wondrous Woo), Maureen Jennings of Murdoch Mysteries fame (The Massey Murders), food policy analyst Wayne Roberts (The Stop), filmmaker John Greyson (The Hungry Ghosts), and the Toronto Star’s Chris Hume (Kicking The Sky).

Each finalist receives $1,000, with the winning author receiving a grand prize of $10,000. The winner will be announced on October 16 at the Bram and Bluma Appel Salon at the Toronto Reference Library.

Board Games Night for Faculty, Staff, and Students 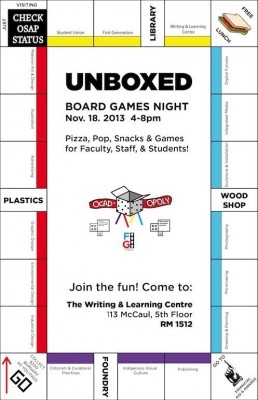 An evening of pizza, pop, snacks, and games for faculty, staff, and students

Before you delve into exam/critique period, give yourself some time to have fun and relax. Come to Board Games Night; an evening of pizza, pop, snacks, and games for faculty, staff, and students.

This event is jointly hosted by the Faculty & Curriculum Development Centre, The Writing & Learning Centre, and First Generation.